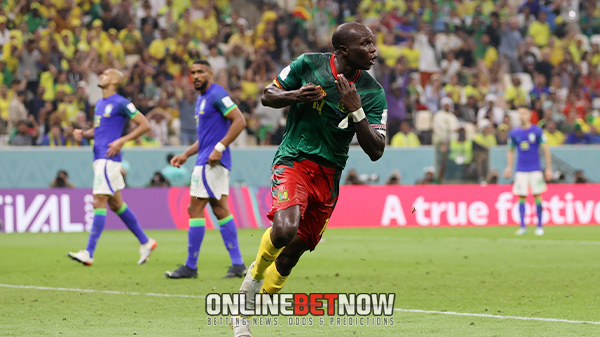 Cameroon seals an infamous victory over Brazil despite the outcome coming in vain – meaning no bearings for knockout qualifications. Vincent Aboubakar’ header late in the second half caused roaring celebrations from Cameroon fans inside the Lusail Stadium to deny the top-favorite a clean sweep at the group stage. The Indomitable Lions are the first African nation to defeat Brazil at the World Cup however their drought for knockout qualification stretched to six world cups –the last time they did qualify in the knockout was in 1990. You may visit us for all soccer predictions here!

The head coach of Cameroon congratulated his team for the win: “My players should be congratulated. They have shown that they should have done better in the two games before this. We gradually improved and it’s a real shame that we are going home now. I trust in my players and they delivered.”

Vincent Aboubakar was sent off after he received a red card as he took off his shirt for a celebration after he scored to beat the Brazilians. Coach Tite laments on the defeat as he said; ‘It will be before me – we lost – the first Brazilian coach to lose to an African team, we will have to suffer 24 hours and then we have to start preparing. We feel the loss, and we must feel the loss when we lose. We have to feel it – it is part of the context.”

Despite that defeat, Brazil still comes out as the Group G victors via goal difference and will have a clash against South Korea.

What a thrilling match between Serbia and Switzerland! The Swiss will progress to the last 16 and will face Cristiano Ronaldo and Portugal. Breel Embolo led the way for Switzerland and stretched their last 16 appearances to three straight World Cups as they also joined France as only two European teams to have qualified for the knockouts in each of the last five major tournaments since 2014.

While Serbia continued their failure to progress from the group stage from all of their last World Cup tournaments (2006, 2010, 2018, 2022) and this is their first time of failing to clinch even a single victory in the group stage (D1 L2) and the last time they have a winless record was in 2006 (L3).

The first half of the match was thrilling and exciting as both teams recorded a combined 4 goals with Shaqiri scoring the goal opener in the 20th for Switzerland, but Mitrovic leveled the game on the 26th and Vlahovic scored the second goal for Serbia in the 35th minute. Breel Embolo did not let Switzerland down at the end of the first half as he scored a 44th minute goal. Freuler sealed the victory at the 48th minute and gave Switzerland a ticket to the knockouts of the World Cup.