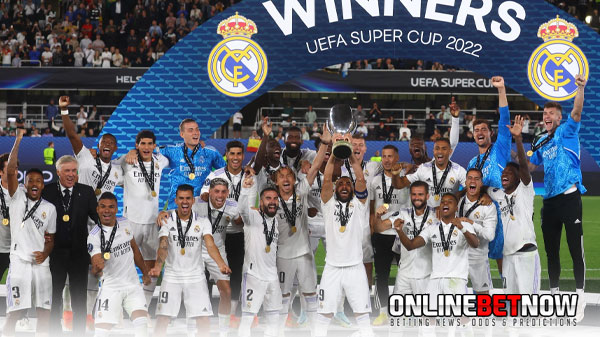 “After we scored the first one we had more control and we didn’t take risks, didn’t play with super intensity but it was a good control,” said Real Madrid coach Carlo Ancelotti, who has now won 2 Super Cups with Real and the first manager to win four overall. “They are used to playing together, they are comfortable, they know each other. It is simple to play together, to find the right time in the game.”

The clash was the rematch of the 1960 European Cup final where Real thrashed Frankfurt 7-3. Alaba opened the scoring for Real in the 37th minute before Benzema followed it up with a second goal almost thirty minutes later. The goal was Benzema’s 324th goal for Madrid, making him the second-highest all-time leading goalscorer behind Cristiano Ronaldo with 450 goals between 2009-18.

Speaking about Benzema’s potential Ballon d’Or win in October, Ancelotti confidently name Benzema as the only winner. “There are no doubts about who should win the Ballon d’Or, it should be Karim for us he’s the most important and most effective player in the world.” Meanwhile, Frankfurt, who made their Super Cup debut, had few chances but it wasn’t enough effort to break through Madrid’s defense.

“We improved compared to our last game [against Bayern], but Real Madrid have two or three great chances against every opponent in the world and then we conceded the opening goal after a corner. We couldn’t convert our own chances – Real Madrid were the better team and deserved the win,” said Frankfurt coach Oliver Glasner. Frankfurt lost to Bayern 1-6 in the Bundesliga opening last weekend.

The Lost Blancos, who beat Liverpool 1-0 in last season’s Champions League, has become the ninth Champions League team to win the competition in the past decade, with only Atletico Madrid clinching the Super Cup as Europa League holders by beating Real in the 2018 edition. Real will open their La Liga title defense against Almeria this weekend.