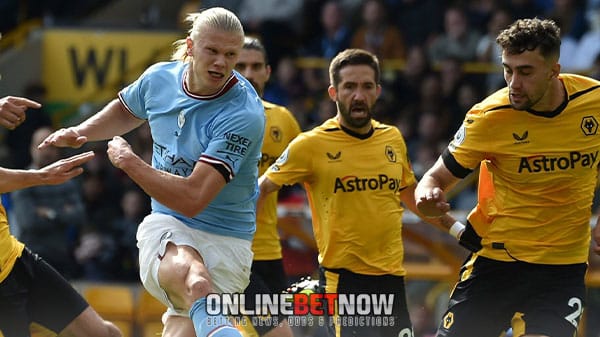 Manchester City remains undefeated in the English Premier League as they thrashed the 10-man Wolverhampton Wanderers in front of a packed Wolves crowd at Molineux stadium. Jack Grealish had an early display of dominance and silenced his growing band of critics by scoring the first goal of the match within just 55 seconds. Thanks to De bruyne brilliant series of crosses and made his way to the box and poked it to Grealish on the side to record his first goal of the season.

Erling Haaland followed it at the 16th minute mark of the match by running the ball and past Max Kilman before blowing his attack using his weaker foot to past Sa and tallied the second goal for the City within 20 minutes of the match. The Wolves fans are fearing the worst and hoping to at least not to let Manchester City score 10 goals or more. Follow us for more EPL soccer highlights here!

The entire first half was dominated by the visiting squad and kept on giving Wolves a series of turnovers and limiting the chances to none at all for perfect looks on the goal. Foden scored the winning goals that also served as the nail of the coffin of the match clinching their fourth win of the season, which added to their 22 unbeaten away games in the English Premier League (16W and 6D). Folden’s goal serves as a last piece to break Wolves’ confidence to have an impossible comeback over Manchester City.

Erling Haaland continued his brilliant performance for Manchester City as he recorded his 11th Premier League goal and 14th in all competitions this season. If Haaland continued his unstoppable scoring output for Manchester City, he would have the huge chance to break Mo Salah’s 34 goals within just 38 games.  It is better for premier league fans, Man City and Erling supporters to have an anticipation for the 22 year old Norwegian footballer to achieve this kind of feat as there still a lot of Premier league remaining games.

Former Manchester United defender Ferdinand has high praise for Erling Haaland and he believes that the Norwegian superstar has the capability to break the record (currently held by Mo Salah) and he added by stating that if “Manchester United takes the Champions League trophy, he will surely win the Ballon D’Or over the big names in Lionel Messi and Kilian MBappe.