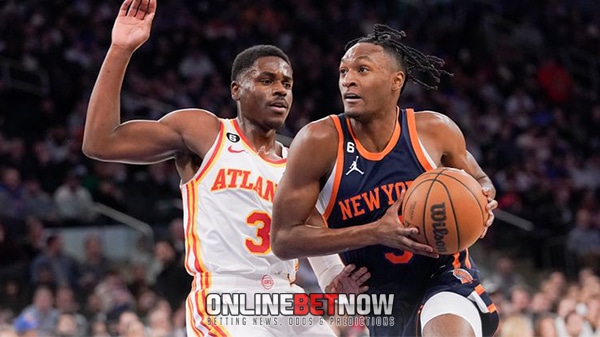 The New York Knicks demolished the Atlanta Hawks in the MSG as Murray exited the game early due to an ankle sprain. Follow for more  Knicks news here!

Tom Thibodeau made a crucial and vital tweak to Knicks’ rotation which gave more emphasis on sticky defense, which the results favored their side and defeated their eastern rival Atlanta Hawks and New York villain Trae Young. You may visit us for more NBA updates here!

The Knicks star and primary option Julius Randle enjoyed his monster game and performance by torching the visiting Hawks with 34 points, 17 rebounds and nailing impressive six 3-pointers to lead the team. While Quentin Grimes also made a consistent strong two-way performance with shooting five 3s and recording a season-high 23 points on his 8-for-11 shooting in 31 minute playing time.

“Well. I think you can see the combination of the way he plays defense and he’s starting to get his rhythm on offense,’ Thibodeau praised Grimes. “He shoots the 3, he reads closeouts well. And I thought Deuce [McBride] gave us really good minutes defensively as well.”

“And I think that’s important for us. Every night there’s going to be guys on the perimeter that are very difficult to guard. So the better we guard the ball, the better that makes us.”

The former No.3 pick RJ Barrett added a valuable 15 points contribution on the victory for the Knicks. He held Young  and the Atlanta Hawks to an abysmal 6-for-36 poor shooting night from 3-point range to improve their record 12-13. Grimes made an important role of being the primary defender of New York, as he gave Young a worst 3-point shooting night despite registering 19 points to lead the Hawks.

‘He’s one of the best guards every night. He’s a tough matchup,” Grimes said to the reporters. “I feel I like making it hard for somebody to score on me, just look at it as a personal challenge, more of a pride thing. So I feel like I can take on the challenge of whoever it is, really.”

While the Atlanta Hawks newly acquired guard, Dejounte Murray left the game early due to sprained left ankle. He finished the game with just playing four minutes and scoring two points.  Young was getting booed after he wore blue and orange sneakers with “King of Broadway” written on it, then the home team lit the torch and demolished Young’s remarkable visit to MSG.

“We knew we had a lot to do with Trae and Dejounte, even though he got hurt, but we were able to help them and then get out to their shooters,” Randle said during the post-game interview.

The new fillers to the starting and main rotation, Grimes and Mc Bride, made an initial impact to the team’s improvement on perimeter defense in the last two games. “I think we just put a whole 48 minutes together, really,” Grimes said. “The last two games we’ve put together a full 48 minutes of good basketball.”