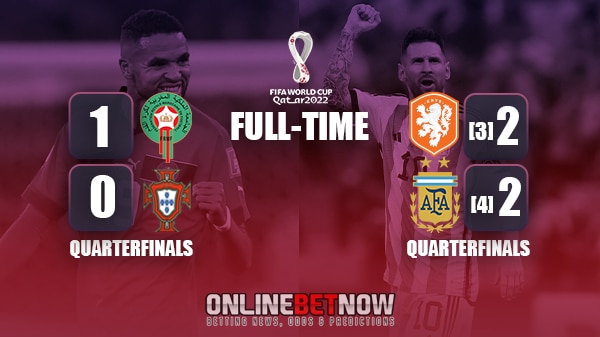 Morocco made history as they knocked out Cristiano Ronaldo’s Portugal 1-0 to become the first African team to reach a World Cup 2022 semifinal, setting up a match against holders France, who eliminated England 2-1 in the quarter-final action. Croatia and Argentina are also through to the next stage after winning penalty shootouts in their quarter-final matches against Brazil and Netherlands respectively.

Youssef En-Nesyri scored the winner and the only goal of the game, enough to keep the continent’s hopes for the first-ever World Cup alive. En-Nesyri scored a few minutes before the half-time. Portugal skipper Bruno Fernandes had a chance to level minutes later but failed to pass the net. Morocco is yet to concede a goal in the tournament heading to the semifinals. Follow us for more soccer stats today!

In another quarter-final match, Aurélien Tchouaméni gave France a first-half lead before England captain Harry Kane converted from the penalty spot to equalize the scores. In the dying minutes of the regular time, Olivier Giroud broke the tie through a brilliant header, with Kane tried to make another equalizer but France held on to win.

Meanwhile, Brazil also ended their World Cup berth as Croatia entered their second successive semi-finals in the World Cup. The Selecao lost 4-2 to the Croats in a penalty shoot-out following 1-1 draw after 120 minutes at the Education City Stadium. The five-time champions failed to pass the semi finals since winning in the 2022 edition and were eliminated twice in quarterfinals under departing coach Tite.

The 2018 runners-up Croatia is looking to seal their second successive World Cup final and win their maiden World Cup title as they face Argentina, who beat Netherlands also in a shootout, next.  In the yellow-card flying match, Nahuel Molina scored his first-ever international goal to put Argentina in the lead in the first half. Lionel Messi added their second as he took a penalty kick in the 73rd minute.

The Dutch team did not lose hope as substitute Wout Weghorst scored a brace in the second-half to send the game in an extra time. The added time was goalless that forced a shootout, with Argentina goalkeeper Emi Martinez making crucial saves to assure his side a place in the semi-finals. The heated match ended with referee Antonio Mateu calling 48 fouls and giving out a record 17 yellow cards.