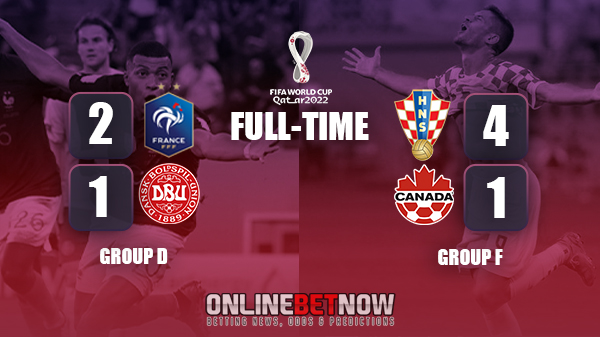 Kylian Mbappe scored twice to help France book the first ticket to the next round of the World Cup 2022, beating Denmark 2-1 in their Group D clash at the 974 Stadium. Mbappe’s brace put France on top of the group with six points and a game left to play, leaving Australia with three, while Denmark and Tunisia with one. Meanwhile, hosts Qatar and Canada became the first two sides eliminated from the tournament after second defeat.

The defending champions France dominated the first-half, with Mbappe’s earliest attempt in the 21st minute that was brilliantly saved by Denmark goalkeeper Kasper Schmeichel. The PSG star fired again in the 61st minute with a great cross from Theo Hernandez to give their team the lead. Denmark quickly responded with Andreas Christensen scoring an equalizer just seven minutes later. Get more European football league updates here!

The score was level until the 86th minute where Mbappe netted his second goal and France’s winner through Antoine Griezmann’s cross from close range, putting them ahead once again and holding it until the final whistle. Mbappe now scored 31 goals in 61 games for France, putting him level with Zinedine Zidane and 20 goals behind Olivier Giroud and Thierry Henry, France’s joint record goal-scorers.

The 23-year-old Mbappe has already scored seven goals in just second World Cup appearance, making him France’s second-top scorer in the tournament. This win avenged France’s back-to-back losses to Denmark in the Nations League campaign. This is also the third consecutive time that France won both of their opening two games at the World Cup. Earlier, Les Bleus came from behind to open their title defense with a win against  Australia 4-1 in Group D. France to face Tunisia next.

Elsewhere, hosts Qatar ended their World Cup campaign after being beaten by Senegal 3-1 with a match to spare in Group A. Both teams entered the match needed a win to recover from their opening loss.  Boulaye Dia opened the scoring for Senegal after few attempts from Qatar that was not spared by VAR. Famara Diedhiou scored Senegal’s second just minutes into the second half.

The hosts scored their first-ever goal in the tournament with Ismail Mohamad’s great cross, finally beating  Édouard Mendy. Senegal responded just seven minutes later with Bamba Dieng scoring in the 84th minute to make the score 3-1 until the end of the match. The Maroon became the first host nation in World Cup history to be knocked out after only two games.

In Group F, Alphonso Davies scored Canada’s first World Cup goal in history, but it was not enough to keep them in the tournament as they became the second team to be knocked out of the game after a 4-1 defeat to Croatia.

Meanwhile, Germany’s hopes alive after a 1-1 draw against Spain in Group E, while Argentina escaped early exit as Lionel Messi fired an opening goal to give his side the lead against Mexico, with the 21-year-old Enzo Fernandez scoring the winner 2-0 and becoming the youngest player to score at a World Cup for Argentina since Messi himself in 2006. The win helped them recover from a huge upset in their opener.