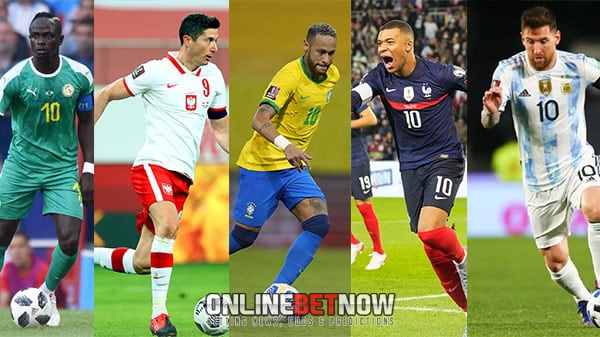 For many decades, football has been the number one sport and the debate on the best footballer is the most talked topic. Catch  World Cup 2022 updates here!

In any sport, especially in football, the question of who is the best player in the world is the most heated topic that many fans, analysts, critics, coaches, and even players themselves can talk about for thousands and thousands of hours and still can’t find or be satisfied with the answer.

Hundreds, or even thousands of articles from various sports and sports betting websites are released and produce articles related to who is the best player or players to watch out in every premier football leagues, major international tournament, and many more. The FIFA World Cup 2022 is just two months away and here we will give to you the Best footballer in the world to watch out for this year.

The Bayern Munich forward from Senegal currently had an underwhelming season in the Bundesliga scoring just three goals so far.  Despite Mane’s early struggles this season, without a doubt, he is still consider as one of the best football players you should watch this season and the upcoming FIFA World Cup in Qatar. He showcased his prowess way back just a year ago for Liverpool, scoring 120 goals and 38 assists in 269 appearances and he became the all-time leading scorer for Senegal National Football team with 33 goals. Just last year, he helped his country to clinch their first Africa Cup of Nations title and became the player of the tournament.

All in all, it is worth including Sadio Mane on this list as he will once again represent his country in the World stage and produce the best output and finishing for his national team.

The Polish Football players now hold 76 international goals and become the all-time scorer for Poland and third in overall men’s international goal scorer in the whole Europe. The 34 year old is still in his prime and producing great contributions for his new team FC Barcelona, the one noted is when score three goals against Viktoria PIzen in 22/23 UEFA Champions League. The most notable game in his career is when he recorded a historic scoring game for Bayern Munich way back 2015, under the umbrella of Pep Guardiola, when he scored stunning five goals in just nine minutes to rout German club Wolfsburg.

This 30 year old Brazilian Phenom currently plays for Paris Saint-Germain alongside Kylian Mbappe and Lionel Messi. He established his name way back when he was in Barcelona as a teenager. His agility and quickness on the court added with his wide selections of moves will make the Brazilian fans go crazy this upcoming World Cup. Neymar Jr helped Brazil to clinched Olympic gold medal was way back at home in Rio 2016. Throughout his career he recorded a total of 200 goals and 100 assists.

Neymar Jr will be having a one of a heck football year as he will help once again his national team to take home the World Cup trophy.  If this Brazilian wonder boy could fulfill his mission to take the World Cup trophy, there is a huge possibility that he will get the title as the best footballer this season.

The 23 year old French midfielder has been on the football scene for quite some times now. He establish himself as one of the best U25 footballers in the world. This year, he made an early display of his domination by scoring seven goals in seven games for PSG in Ligue 1and two goals made this UEFA Champions League.

He is known for his quick and fast running – making him as one of the most viral footballers in all social media platforms with his viral footage of him running towards the goals, chasing football, and making quick crosses towards his opponents. Mbappe netted a whopping 42 goals and 11 assists in all his 47 games with Paris Saint-Germain FC.

This number one spot is undebatable and convincingly given already to the Argentine Superstar in Lionel Messi. His rival, Cristiano Ronaldo had so far dealt with a series of struggles this season. His total career goals are 773 combine for clubs and his country. He netted 672 goals in his run with Barcelona, 15 for PSG, and 86 for Argentina. He passed Romario to reach the top three all-time scorers in football history, so far he tallied three goals and two assists in three games for the French club.

The 35 year old will probably have the last dance for his country in this upcoming FIFA World Cup and will surely make this a memorable tournament for him and his country. This year could be another huge and historic run for this Argentine football superstar.