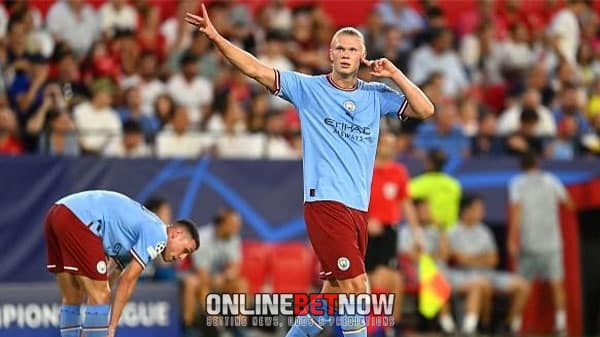 Erling Haaland displayed his dominance to lift Manchester City in a routing fashion victory over the Spanish club, Sevilla FC. Foden and Dias also contributed a goal in the second half. The Norwegian superstar scored each goal in both quarters, making his all record goals this season to 12.

You can follow us for more soccer highlights and news here!

The routing in Southern Spain started in the 20th minute when Erling Haaland broke through the defense and made a tap-in goal from the close range, thanks to De Bruyne’s great passing to give Pep Guardiola an early lead. The first half of the match forced the host team to sit deeply, letting Manchester City jump start their dominance.

The second half led us to the same fate as Phil Foden gave the second goal for City at the 58th minute mark of the match. The quick and agile Cancelo passed to Foden who crossed Gudelj to kick the ball at the corner.

Despite Bounou’s  defense, blocking series of attempts including the kick from Foden but he pushes it on to the direction of Haaland – kicking at an empty net. The star striker scored his second goal and third team goal of the match for Man City.

To seal the victory, during the extended time, Cancelo’s great ball handling and crossing defenders caused him to meet the running Dias straight to the goal with a very easy close range. This is Manchester City’s first huge win against the Spanish club in all competitions. While Sevilla remains winless enduring all four losses in all competitions this season, including this embarrassing match result against top English club Manchester City.

The mentor Pep Guadiola always placed winners mentality on every game, leaving no chances, and giving every ounce of best on every match. With this kind of attitude that Guadiola employed on his players and the club, they never failed to reach the last 16, and to perform well in every bigger match.

The Belgian midfielder has high praise for Haaland’s brilliant start for Man City in the Champions league. “I try to do my job and make the right movements and create the most chances I can,” admitted the skipper. “I know one way or another Erling [Haaland] will be there. At the moment he’s scoring the goals. For him it’s a perfect start,” he added.

“I think the way he has adapted to us is really good but obviously, outside of the goal scoring there’s another part of the game and that is more tough to adapt to,” he said. “It makes it exciting if he can adapt to see the outcome. If you score that much you can get away with things. If he keeps on scoring then we know it’s a positive for us”

With the convincing win and an impressive start for Manchester City, they are now sitting at the top of Group. Dortmund also got their first win over Copenhagen 3-0. The next match of Man City in Champions League is on September 15 with an exciting clash between Dortmund.