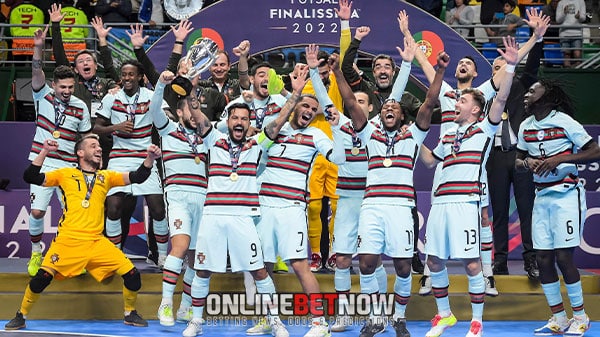 “It’s a difficult sensation to describe,” Portugal captain João Matos said. “We’ve taken Portuguese futsal to a position it’s never been in before; it’s been building since 2011. We’ve built a team, a side with lots of qualities. “We have beaten a quality Spain side who play well. [This is] a new trophy, the Finalissima, a long way from home in difficult conditions on a pitch that’s different to back home.”

In the final, Portugal made a lot of early chances through André Coelho’s and the the hero of the Futsal EURO 2018 final Bruno Coelho’s efforts but failed to convert it to a lead.  Spain stepped up their game and set up a corner kick just before the break, with Miguel Mellado connected with Antonio Pérez’s perfect ball for an easy futsal soccer net.

“I got the goal and that gave us confidence, but they drew level and in the end my goal’s an irrelevance as we lost it on penalties,” Mellado said. Portugal bounced back and set up an equalizer through a rare mistake for Spain; Pol Pacheco’s pass inside his own half was cut out by Afonso Jesus, who advanced and chipped in over Didac Plana. Portugal tried to break the tie but failed to deliver that force an extra time.

Portugal previously beat Spain in extra time in both the Futsal EURO 2018 final and 2021 World Cup last eight. But, they weren’t able to duplicate those feats as the game entered the shootout. Spain’s Raul Campos missed a penalty to give Portugal the win. Portugal have now clinched their first World Cup, retained the Futsal EURO title and won the inaugural Futsal Finalissima all in the last 12 months.

Meanwhile, Paraguay earned a bronze medal by beating Argentina, who had defeated them in the Copa América final earlier this year. Richard Rejala and Julio Mareco put Paraguay up 2-0, but Cristian Borruto scored to cut the lead. Later Arnaldo Baez made it 3 before Alan Brandi scored for Argentina; however Paraguay held on in a dramatic finish.