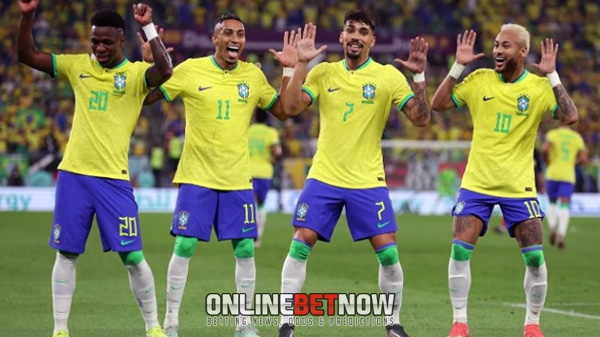 Brazil dominates South Korea and dances their way to the quarterfinals with early massive four goals in the first half. Follow for more soccer today news here!

The Brazilian squad made their way through to the quarterfinals look easy at the 2022 FIFA World Cup after demolishing South Korea in the first half. The Tite’s side was obviously on another level compared to the Korean squad, as Vinicius Jr. and Neymar both put on a clinic in the first 15 minutes. The returning Neymar successfully made the penalty kick. Richarlison and Lucas Paqueta scored in the 29’ and 36’. You may visit us for more World Cup soccer predictions today here!

On the other side, South Korea were very inferior in this game as Son Heung-min and Hwang Hee-chan struggles badly to find perfect looks from the net and it was very evident as the losing side just put six of their eight shots on goal compared to Brazil’s 18 shots and nine on frames. Seung-ho Park got the consolation for South Korea to avoid ending the game scoreless.

Brazil will now have an all-out clash against the 2018 World Cup runner-up Croatia in the quarterfinals with the winner booking an exciting battle on the victor of the Argentina-Netherlands match.

The group stage of this most-favorite squad in the World Cup was somehow underwhelming, and for others are disappointing – with just three goals in the group stage campaign, and losing the final group game to Cameroon, the rumbling of doubts all the way to Brazil as whether this squad will live on it’s expectation as a real contender and championship caliber.

That took just less than 45 minutes into the match against South Korea to prove to the world how emphatic and dominant Brazil was. Richarlison displayed it when make it 3-0 for Brazil and danced after as a form celebration and a tribute to Pele. Even Tite joined the dance party with Richarlison. This is the real Brazil, a cocky yet effective performance that everybody had been waiting for.

This is the first time Brazil scored four goals in a knockout round of the World Cup since 1998. Neymar became the third Brazilian to score in all three World Cups. While South Korea stretched their losing streak to the South American sides to seven World Cup games.

With this superb performance by Brazil in the round of 16, it is heavily favored that this side will dominate the aging and struggling Croatian side in the quarterfinals. It is unclear on what team that can stop the dominance of Tite’s squad led by high-caliber players in Neymar, Vini Jr., and Richarlison.

Kim Seung-gyu, the South Korean goalkeeper had his own performance in a lifetime as he made five important saves in the game, some are directly on the way to the center of the goal. This match could have ended in a more emphatic Brazilian way that could rack up to 6 or 7 goals. But Seung-gyu did a great job to limit Brazil. Although conceding four goals is never a worthy stat.