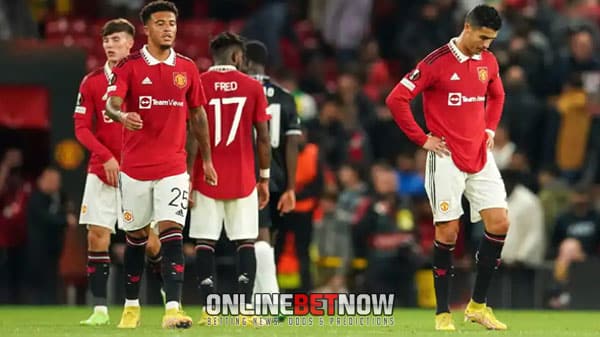 The Europa League group stage campaign has already started this week, with shocking losses and well-deserved soccer scores. In the wake of the nation’s mourning following the passing of Queen Elizabeth II, Britain’s longest-reigning monarch, the Europa League games kicked-off as planned. Here are the highlights of this week’s European club action.

Despite Cristiano Ronaldo’s return to the starting lineup, Manchester United still suffers 1-0 defeat at packed Old Trafford in their Group E opener against Real Sociedad. The match started with a minute’s silence in memoriam to the Queen’s passing, with both sides seen wearing black armbands and flags were at half-mast. Don’t miss the odds to win with one of the top soccer prediction sites!

Ronaldo netted in the first half only to see the offside flag raised. Brais Méndez’s second-half penalty handed Sociedad its first win against an English team in a competitive match, while this was United’s first lost in 18 Europa League home matches – group stage to final – since losing to Athletic Club in March 2012. The Red Devils tried to equalize the match but failed to break the Spanish side’s defense.

Arsenal continued with its impressive form as they kicked-off their Group A campaign with a win away from home. The Gunners beat FC Zürich 2-1 courtesy of Marquinhos and Eddie Nketiah’s goal. The match also started with a minute’s silence as the news about the Queen’s passing broke. The match was Arsenal’s first appearance in European football, having missed out a slot in the previous seasons.

Mikel Arteta’s men were dominant during the first few minutes of the game until new signing Marquinhos opened the scoring in the 16th minute, becoming the first Arsenal player to debut with a goal in a European fixture since 1981. Zurich equalized via Mirlind Kryeziu’s penalty before Nketiah, who missed a penalty in the first half, headed home a perfect Marquinhos cross.

Freiburg returns with a win

SC Freiburg marked their return to European club competition with a win against Qarabag 2-1. Japan’s Ritsu Doan scored the winner in Freiburg’s first appearance in the European competition since the 2013/14 campaign. Vincenzo Grifo converted a penalty from the spot in the 7th minute to give the host the lead before Doan added another 7 minutes later. Mark Vesovic scored Qarabag’s consolation.

Ludogorets ended their 18-match winless run in the Europa League after beating Europa Conference League winner AS Roma 2-1 in Group C match. The Brazilian midfielder Cauly Oliveira Souza opened the scoring for Ludogorets before Eldor Shomurdorov equalized for the Italians four minutes from time. Nonato scored the late winner for the hosts with two minutes left to play in Bulgaria.