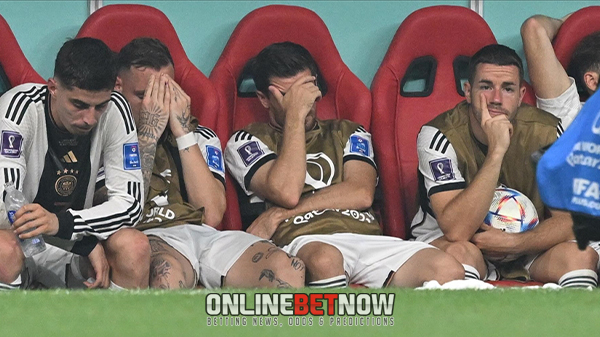 The 2014 World Cup champion sensationally out of the World Cup picture despite a convincing 4-2 victory over Costa Rica. Follow for more soccer highlights!

On the final day of the Group E match, Japan pulled another upset and this time against the Spaniards as they topped the group standings. With these shocking results, Germany finished third in the standings, behind Spain on just goal difference. To get updated for the World Cup all today soccer matches click here!

In 2018, Germany was shockingly exited the World Cup also in group stage but with a stunning defeat over Korea. But this time, they had a victory in their last game but still was not enough to get past the group stage. Serge Gnabry scores in the 10th minute to give Germans hope to cling on, however Costa Rica scores twice with Tejeda and Neuer’s own goal. While Japan is processing their huge victory against Spain. Kai Havertz put the Germans back, while the substitute Niclas Fuellkrug added at the stoppage time but it was already in vain as the Germans had nothing to do to prevent their elimination.

Germany head coach Hansi Flick expressed his disappointment towards the result of their campaign in the tournament. “In the first half I was disappointed and very angry at my team and how we allowed the opponent to come back. We wanted to score three or four goals in the first half but then we made mistakes. If we had converted those chances, 16 of them. But the tournament was not decided today for us. We did not have any efficiency at this tournament and that is why we were eliminated.”

Germany will go home with their heads dropped and frustrations on their hands as they missed out the bigger picture of the World Cup.

What went wrong with Germany?

Well, there are a lot of obvious factors that are pulling the team from performing at their best in this tournament, instead pulling another card, a big-time failure.

Many critics and football analyst believes that team had too much confidence and they just not making serious of the game, it was very obvious in their first game against Japan as they are leading 1-0 at the half – then Japanese Coach Hajime Moriyasu made some changes early in the second half, three subs are already made. That’s when things started to get worse for the German squad, the team went from being aggressive in the first half to being passive in the second. The team did not take their chances seriously, and the Japanese punished Germany’s laziness and selfishness with two late goals. There are also a lot of questions on how the coaching staff are deciding on using substitutions to utilize the talented squad, and instead focusing more on defense when in fact Germany really lacks an aggressive attacker that can produce points when matters the most.

Many critics also point out the decision of Hansi Flick on giving limited playing time for the striker No.9 Fullkrug that can give Germany an easy scoring output even during crunch time. Fullkrug entered the game at 80th minute against Japan and did not make any difference. This is something a terrible mistake committed by the coach.

Japan will face Croatia in the round of 16, while Morocco will have an interesting and exciting match against the top candidate Spain.