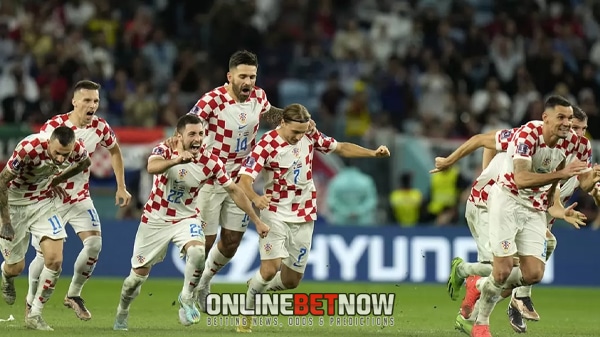 Japan exits the World Cup after losing to Croatia at the round of 16 of the World Cup as Croatia will next face Brazil. Follow for more soccer bet news here!

Dominik Lavakovic saved three penalty kicks and Mario Pasalic scored the winning spot kick that sent Croatia to the quarterfinals and ended the last match at the Al Janoub Stadium with a thrilling ending. This is a major heartbreak for the Blue Samurai aiming to reach their first-ever quarterfinals stage. For more sure soccer predictions click here!

The 2018 World Cup finalist struggled throughout the tournament as they finished second in the group stage campaign, losing the first spot to Morocco and it looks that the team will likely end their World Cup campaign from the hands of the valiant Japan.

The Celtic striker Daizen Maeda scored the opener to push Japan up 1-0 over the Croatians. However, Zlatko Dalic is not ready to say goodbye at the world cup as he slides through the ball onto the path of Ivan Perisic who pulled a six-yard header and leveled the game.

This thrilling round of 16 match ended with a penalty shootout, as Takuma Asano is the only player who scored in the penalty while Vlasic, Brozovic, and Pasalic scored and won it for Croatia.

“They gave us a hard game, but we knew that would be the case, it’s not a coincidence that they beat Germany and Spain,” Nikola Vlasic told reporters. “We had more chances and I think we deserve to win.”

Japan Head Coach Hajime Moriyasu hailed the Blue Samurai’s effort in this best World Cup campaign of the Japanese side and says that the team has a “bright future”.

“The players showed us the future, a new era of Japanese soccer. We beat Germany, we beat Spain… If we take confidence in that, and if we think about overtaking these rather than just catching up. The future is bright.”

Despite this heart-wrenching defeat, Japan can still treasure this impressive World Cup campaign as it greatly contributed to the landscape of the 2022 World Cup by defeating Germany, and defeating Spain and finishing as a group winner. “Every day, for four years, we worked hard to break this barrier, but we couldn’t get the result we wanted,” Maya Yoshida said.

The goalkeeper Livakovic became the hero of this match after he saved three crucial penalty kicks that sent them into the last eight. He used his 2018 World Cup experience to edge the Japanese squad and ended their hurdles during the early stage of the tournament.