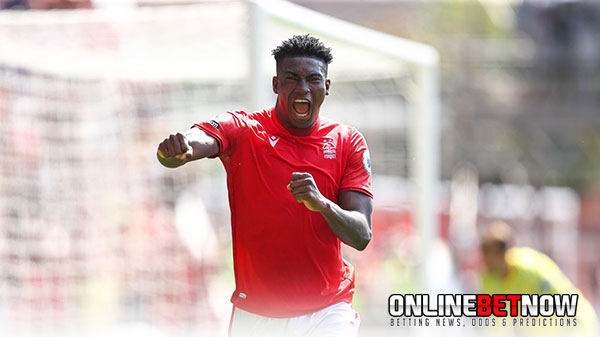 The English Premier League, Bundesliga and Ligue 1 opened the European soccer season last week, while La Liga and Serie A kicked-off their new season this weekend. These are the highlights of the most recent soccer action in Europe’s top five leagues. Don’t forget to claim our online jackpot when you register an account here at the best online gambling site.

Nottingham Forest’s record signing Taiwo Awoniyi has scored the club’s first Premier League goal in 23 years to beat West Ham United in the second round of the new season. Forest last scored in English top-flight in 1999. Chelsea and Tottenham bosses were sent-off following a heated end to the 2-2 draw, with Antonio Conte and Thomas Tuchel engaged in physical confrontation twice.

Meanwhile, Brentford thrash Manchester United at home 4-0 that stunned Cristiano Ronaldo, who made his first start for the Red Devils this new season. It was Brentford’s first win over United since a 2-0 victory in the FA Cup in February 1938. At the time of writing, holders Manchester City tops the league table following the second league win, thrashing newcomers Bournemouth 4-0 at home.

Villarreal tops the opening weekend of the league table with a win against Real Valladolid 3-1. They are set to strengthen their ranks as they re-signed Tottenham midfielder Giovani lo Celso on a season-long loan deal. Lo Celso played 16 times last season for Villarreal under coach Unai Emery. Coming this week, Athletic, Getafe and Real Betis will be at home against Mallorca, Atletico Madrid and Elche, respectively.

AC Milan opened their Serie A title defense with a 4-2 win over Udinese, with the champions bounced back from behind with less than two minutes on the clock. Roma’s summer signing Paulo Dybala debuted with fine attempts that inspired Bryan Cristante’s goal to give Jose Mourinho the opening win against Salernitana 0-1. Mourinho targets a top-four finish and a Champions League spot this season.

Meanwhile, Romelu Lukaku took only 82 seconds to mark his Inter return with a goal, setting up the 2-1 win against newly-promoted Lecce. Lukaku returns to Inter on loan, a year after he left to join Chelsea. Monza’s top flight debut was spoiled by Torino 1-2, with Aleksey Miranchuk scored on his Torino debut before Antonio Sanabria sealed the win with a fine acrobatic volley.

Bayern Munich seemed to move on from Lewandowski’s departure as they registered their second Bundesliga win, beating Wolfsburg 2-0 courtesy of Jamal Musiala and Thomas Muller’s first half goals. The 10-time defending champions has scored a total of 80 goals against Wolfsburg, their longest scoring run against any opponent in the league.

Borussia Dortmund also won back-to-back opening games, scoring three goals in 11 minutes in the second half to win against Freiburg 1-3 from behind.  Meanwhile, Timo Werner scored on his return to German top-flight, opening the lead for RB Leipzig in a 2-2 draw against Cologne. Leipzig were also held in their opening game game VFB Stuttgart 1-1.

Paris Saint-Germain made history as they thrash Montpellier 5-2, becoming the first team to score at least five goals in each of their first two games of a Ligue 1 season since Reims in 1961-62. Alexis Sanchez made his debut for Marseille as a second-half substitute. But, his appearance did not make an impact as Igor Tudor’s side settled for a 1-1 draw against Brest.

Returning side Auxerre, the French league champion in 1996, also settled for a stalemate against Angers 2-2, who scored the rescue points inside 10 minutes before the final whistle. Meanwhile, Lorient’s home game with Lyon was postponed due to the venue’s safety measures following a heatwave and a recent Celtic festival held inside the Stade du Moustoir.