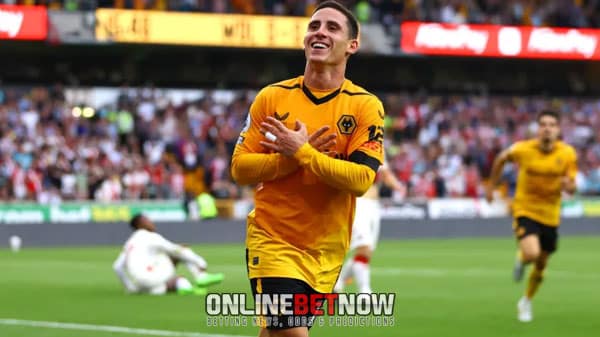 “Daniel Podence ended the Wolves’ misfortune this season by sealing the deal with the goal in the first half. Check some football matches today.

This is Wolves first win of the season as they rose to 14th seed.

Despite team’s first victory over the Saints and first three points on Lage’s sides that helped them to move up at the 14th place. The entrance to Hwang Hee-chan during the final stage of the match was greeted with boos from a small part of home supporters. However, the boos and jeers turned into cheers and chants as the Korean forward displayed his full effort and energy in the minutes he was on the pitch.

Last month, Hwang Hee-chan was linked to a transfer rumor with the other team in the Premier League Leeds United said to be interested in the Korean forward. According to the Wolves mentor, that move away rumor affected the performance of Hwang. Follow us for more European football here!

The South Korean strikers had played a total of 37 matches for the club since joining last season. He tallied 5 goals and two assists this season, his presence is still not strongly visible and mostly contributing on executions of plays and energy.

Hwang posted on his Instagram his gratitude from the support he received during the match against Southampton at Molineux.

“Thank you for your amazing support,” he wrote on Instagram. “Very happy to hear the fans singing for me. This makes me feel special. I hope to hear this more often. Thank you. Wolvesaywe.”

Manchester United continued their brilliant performance by beating the current number one seed Arsenal 3-1. The team also gave Arsenal its first loss of the season.

Antony had his debut match a stunning for Man United with a convincing victory after he rallied their first goal of the match during the 35’ – the newly-signed winger contributed to United’s fourth victory of the season and top 5 of EPL standings.

Marcus Rashford led Man United with two goals, all in the second half, 66’ and 75’. After Bukayo Saka’s goal in the 60’ to tie the game and brought the momentum on Arsenal’s side. The 24 years old  took matters into his own hand to seal the win on Ten Hag and Red Devil’s side.

In an interview from a known news outlet on his thought about the game, he said “I thought it was an even game. We managed to exploit the spaces and that’s what made the difference. We’ve got some excellent passers of the ball and you know that if you keep making runs you’ll eventually get a chance.” He adds, “It’s been a long time since I scored against Arsenal. It’s something I was looking to do this year, and I’m happy I did. It’s A great feeling, you do miss it as a player, and I hope I can stay fit and healthy.”

Rashford added that teamwork will give the team this convincing win. Building chemistry and communication can nurture the team. Ten Hag said that the team is still on a formative stage, building great team takes time and sacrifices.