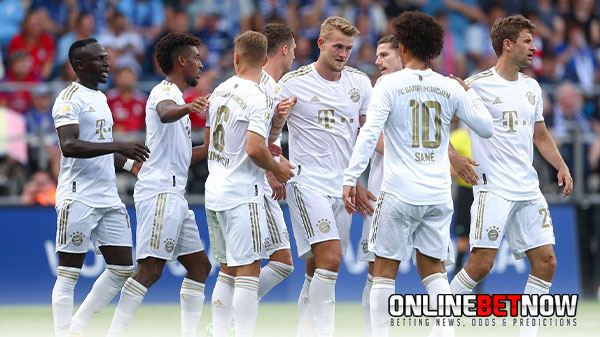 It’s another matchday and another entertaining game for Bayern Munich as they thrash VFL Bochum 7-0 with Sadio Mane scoring twice helping Bayern Munich maintain a number one seed. The game literally was on the side of Bayern Munich by making it like a training or a preparation match with a display of their prowess as a reigning Bundesliga Champion. The Bundesliga table is still dominated by the champion Bayern Munich sitting at the first spot with 15 team goals made through just three games.

This embarrassing football results for Bochum who did not show any signs of response nor any movement to crawl back into the game and ended up scoreless in front of the home crowd. Bayern Munich made an early outstanding performance started by Leroy Sane  goal on the 4th minute mark  with his right foot creates an early thrashing of the game followed by Matthijs de Ligt on the 25th and two consecutive goals at the 33rd and 42nd minute mark by Coman and Sane.

“We don’t set any limits at first, we always try to do our best. As soon as we warmed up I heard that our positional play was good. That’s always a good indicator. We wanted to consolidate the processes and also win the second half,” Nagelsmann said. Despite entering the tunnel at the end of the first half with a huge 4-0 lead, Nagelsmann emphasizes that the team sets no chances to their opponent and sets no limits to his team and he keeps them to continue the competitive and winning mentality until the final whistle.

The one of the oldest football clubs in the world, VFL Bochum is facing a series of struggles this season as throughout three games they only tallied three field goals made one against Mainz and two against Hoffenheim. The only players that tallied a goals for them are Simon Zoller recording two goals during the 10th and 13th minute mark in a losing effort against Hoffenheim and Kevin Stoger on the 39th minute mark but countered by Mainz’ Onisiwo on the 77th minute to steal the game from the winless VFL Bochum

The team will face another contending team in SC Freiburg which recently won against VFB Stuttgart and now had a winning chance of 63% of the votes while only 16% are on Bochum, and a 21% chance of draw. From this pre-game statistics it shows that the underdog will be having another rough and tough game against rank five SC Freiburg right after an obliterating 0-7 loss over Bayern Munich.

Going to other match results of the matchday 3: Union Berlin won against RB Leipzig led by Seibatcheu and Becker in the first half while Leipzig had a mini run at the 83rd minute by Orban. Followed by Hoffenheim rout Leverkusen 3-0, started by Baumgartner at the 9th minute followed by Kramaric at the 34th minute to close the first half and the game closed out by Rutter at the 78th minute to carry the victory at the side of Hoffenheim to improve their standing to the sixth spot. You can catch more EPL football results here!