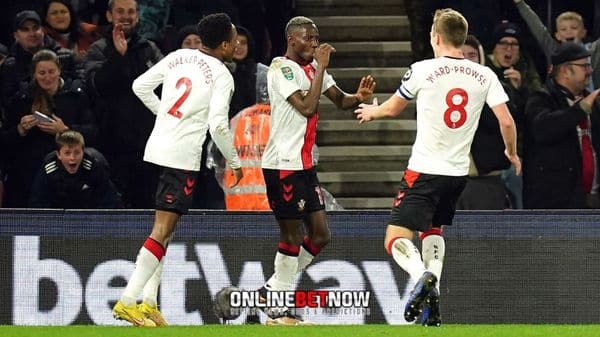 “We had a bad night,” says the Manchester City manager Pep Guardiola after their shocking Carabao Cup exit after the 2-0 defeat in the quarterfinals of the tournament from the hands of Southampton. The Blues struggled obviously in this match and looked like not reigning Premier league champions and added to their disappointment was the first half goals from Sekou Mara and Moussa Djenepo. For more best footballer in the world news here!

Pep Guardiola gladly accepted the results and praised the bottom team of the Premier League Southampton performed really great to upset and dismantle the rhythm of the reigning champion. “The best team won. They were better. We had a bad night and we didn’t play good.”

Despite the issues of thousands of Saints supporters following the appointment of Nathan Jones that gave him the sight of 10,000 empty seats coming into the match against Manchester City for an EFL Cup quarterfinals. The major factor was Jones lost his first four Premier League games in charge and he was immediately put his validity as a football coach put into questions by fans and critics. But this match turned things in his favor as he guided Southampton to one of the most stunning victories and upset in English football as they denied Manchester City an entry to the semi-finals and they did it without conceding a goal and ended the match with a convincing 2-0 rout.

The Saints will now face Newcastle United in the semi-finals of this tournament to continue their English football glory. Jones really deserved the praise, he lifted this Southampton squad with no big names in their roster, defeating the stacked Manchester City in their home at St. Mary gives the fans a new hope this 2023. The team now transferred their focus on the EPL match and EFL Cup semi-finals.

Jones is likely to have his redemption this year after being wounded by a hundred of harsh criticism and was delighted about this important victory. “I’m really proud of the players, of myself and the coaches. We’ve gone through a lot recently, people questioning lots of things. That goes a little way to justifying why we’re here and what team we’re trying to create. We were excellent. It’s been building. I’ve had three Premier League games and I only had one day to prepare for Liverpool.” He added, “I’m not David Blaine. I understand people’s frustrations but we’re building. Rome wasn’t built in a day – we’re on the way.”

In their win against Manchester City, there was an obvious improvement in terms of their aggressiveness, intensity on both ends of the pitch, and fierce pressing which is the hallmarks of the coaching career of Jones that he injected to Southampton. Pep Guardiola tried to answer back by matching the intensity of the home team, however it wasn’t enough as they also missed the presence of their main attacker Erling Haaland, so the team was blown out by Southampton in terms of three aspects: aggression, intensity, and pierced pressing which is essential both on offense and defense to win the match.